After seven years, thousands of hours, and millions of dollars spent on design and testing, the West Coast Groundfish Electronic Monitoring (EM) program slated for implementation by January 2021 is in jeopardy. Although the situation is complex, the primary sticking points that are putting the program at risk are mounting costs and questions of who will pay for what. 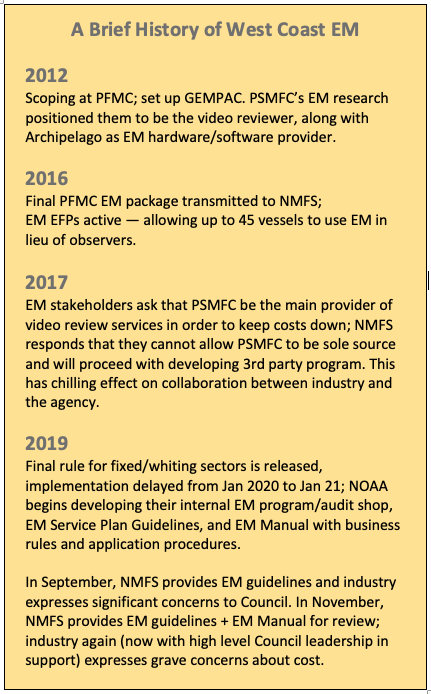 monitoring requirement since 2011. NOAA partially subsidized costs for observers during the first few years, but since 2015 fishermen have borne their full cost (at approximately $500 per day). To pilot EM and hopefully lower those costs, three EM exempted fishing permits (EFPs) went on the water beginning in 2015. The EFPs were developed by the fishing industry in collaboration with NOAA Fisheries, Pacific States Marine Fisheries Commission (or PSMFC, which currently acts as the third-party video reviewer), and non-profits such as The Nature Conservancy (TNC) and Environmental Defense Fund (EDF).

That $500 per-day expense and other management-related operational costs — along with a sluggish overall market for groundfish — has acted as a fiscal brake on this major West Coast fishery ever since. Now, additional program costs loom and fishermen fear that the promise of EM as a cheaper, simpler way to meet accountability requirements may not be realized when the EM program is due to hit the regulatory books in 2021.

What are those new, looming costs? The program being implemented by NOAA’s West Coast Region overlays an additional process, namely an auditing of 3rd party video reviews. The EM process as proposed by NOAA[1] can be envisioned in the following steps:

Estimates from EM providers (who are being asked under the new program to assume third-party review responsibilities) indicate that the cost of those services would be significantly higher than what PSMFC currently charges, since PSMFC already provides such services to both West Coast and Alaska vessels in a variety of fisheries. Also, any investment in review services for new third-party providers would likely be quite high relative to a market potential of less than 80 trawl vessels that may deploy EM under the West Coast program.

Complicating this already-dense budget situation, the program’s requirement of a third-party system (rather than the current PSMFC function which does not require an audit) would add another $450,000 to the NMFS budget[2] for debrief/audit services that would be cost-recoverable from fishermen under existing federal rules.

The response from stakeholders

The reality of this cost picture came to light during the September and November PFMC meetings, when the Groundfish Electronic Monitoring Policy/Technical Advisory Committee (GEMPAC) met. They reviewed a draft EM Guidelines and Manual that describes business rules for providers, and heard cost estimates from NMFS. Upon review and discussion, the views of most EM stakeholders were that the program as envisioned will not provide an efficient and cost-effective alternative to human observers, and therefore won’t see significant uptake by the fleet if and when implemented in January 2021.

Meanwhile, the agency has clarified its position that EM is a voluntary program, and that NOAA will continue building out the third-party program as required under the final rule for implementation by January 2021. This situation locates the two key players – fishermen and fishery managers – at odds with one another on how best to move forward.

The November PFMC meeting provided opportunity for much public and hallway conversation around the EM program. In essence, industry is now telling NOAA that it wants to retain the more cost-effective PSMFC as its video reviewer and that audits of their work product are unnecessary.

“Let’s save the patient by working together to maintain the program (that) we know works,” said Heather Mann, executive director of the Midwater Trawlers Cooperative and member of the GEMPAC. “Industry is willing to pay its fair share.”

EDF’s Shems Jud offered his perspective as a longtime advisor to the Council. “Is it success if fewer boats use EM under regulations than they do today? That’s not success. Ideally, we’d like to see an increase in the number of vessels, and maybe even EM usage in fisheries beyond this one. That’s not going to happen under the proposed model.”

PFMC member Bob Dooley weighed in as well. “We have an affordable and efficient EM program for the groundfish trawl sector in place now. The problem is a series of policy decisions venturing into an unsustainable and expensive system that no one can afford to use. We must find a way to continue with the program that PSMFC, NMFS and others have built and find a way for industry to participate in the cost of video review.”

A model for other fisheries?

An extra burden weighing on developers of the West Coast EM program is that, if successful, this would be the first Council-NMFS regulatory EM program and a potential model for multi-species applications in other regions. So there is desire all around the table to get it right, to encourage participation and bring overall costs down. NOAA’s West Coast Region bears the responsibility to put all the pieces in place, and it is proving to be a challenging task to navigate new EM policy directives, implementation elements and industry needs.

Where will the program go from here?

At this juncture, stakeholders and Council members are looking for a bridge between an EFP program that is working and the third-party vendor program of the future. One thing everyone agrees on is the need for collaboration; for stakeholders to give input and be heard, and to recognize the regulatory responsibilities NMFS faces in carrying out this important new program.

At the November meeting Council members engaged in a lengthy discussion about how to move forward, recognizing industry’s concerns and the agency’s responsibilities under the rulemaking process. Following from their final motion, the Council will next send a letter to NOAA requesting they delay EM implementation until Jan 2022 (a year later than currently planned) and use the time to work collaboratively with PSMFC and industry to further develop a program that meets the goals of cost-effectiveness for the industry (see draft motion here). Time will tell how the agency chooses to respond.

In the meantime, industry groups may seek renewal of EM EFPs in March 2020 to allow them to continue using EM through 2022, and efforts are afoot to seek an appropriate funding mechanism to allow industry to pay PSMFC to continue providing video review services. One thing is for sure, there are likely more twists and turns ahead on the road to implementing the West Coast EM program.

Melissa Mahoney’s 15+ year fisheries research and policy career spans academic, governmental, and non-profit sectors. She currently works as a Policy Manager in the Oceans program at Environmental Defense Fund (EDF), where she supports fisheries policy work at the federal level, including a conservation advisory role for the Pacific Fishery Management Council’s Highly Migratory Species and Groundfish EM Committees. Melissa is also a member of EDF’s Smart Boat Initiative and leads an EM pilot project with small boat fishermen in her home waters of Monterey Bay, California.