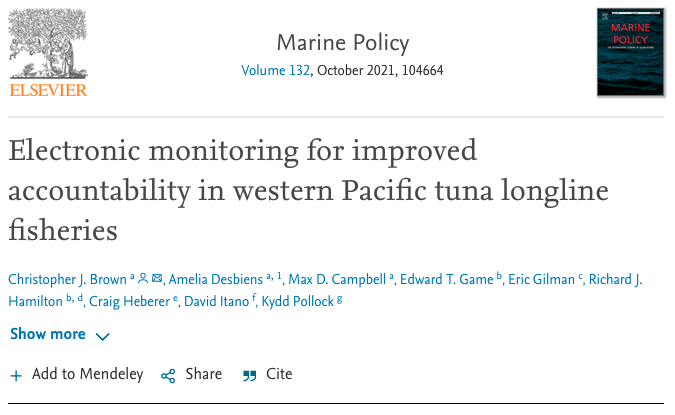 The collection of accurate fisheries catch data is critical to ensuring sustainable management of tuna fisheries, mitigating their environmental impacts and for managing transboundary fish stocks. These challenges are exemplified by the western Pacific tuna longline fishery, whose management includes >26 nations, but is informed by critically low coverage of fishing activities by scientific observers. The gap in observer data could be filled by electronic monitoring (EM), but there are few trials that span multiple nations. A large-scale trial of EM systems on tuna longliners based in Palau, Federated States of Micronesia and the Republic of the Marshall Islands, is reported on. Comparisons are made of catch rates of market and bycatch species in corresponding EM, logbook and human observer data. Retained species were under-reported in logbooks by up to three times and discards of many species were not reported in logbooks. Discards identified in the EM data included threatened species such as marine turtles. Catch rate estimates from EM data were comparable to those estimated by human observers. EM data recorded a higher species diversity of catches than logbook data. Analysis of the EM data indicated clusters of bycatch that were associated with specific fishing practices. These results suggest further expansion of EM could inform improved management of both target and bycatch species. Ultimately greater coverage of EM data could contribute to reconciling debates in international stock allocation schemes and support actions to reduce the impacts of the fishery on threatened bycatch species.